If you want a few very impious laughs, check out The Farting Preacher.
at 9:01 PM No comments:

The new TOEFL test is out. It'll be interesting to see what changes have been made. Thank to EFL Geek for the pointer.
at 5:09 AM No comments: 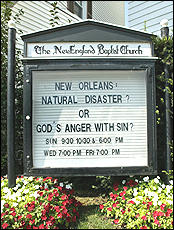 So much for that theory that the storm was caused by warming Gulf waters possibly affected by global warming. We'll have to start training our weathermen in the science of predicting divine retribution.
at 9:36 AM 2 comments:

If anyone thought racism wasn't alive and well in the U.S., check out the following comment over on Dr. Phat Tony's:

Now that the water has began to subside and rebuilding efforts have started, it’s time for the poor black people of New Orleans to start with the long and hard process of re-accumulating the wealth and items that they lost during the hurricane. Luckily with the help of the Red Cross this is happening. Thos who did not get to loot, or were too late to steal anything of value, have another chance to go and get the things that will help them survive the next few months on someone else’s dime.

The same person who's falling over himself to give dollars to Halliburton billionaires is up in arms about helping people hit by the worst natural disaster in U.S. history. Hmmmmm. I wonder why?
at 9:40 AM 2 comments:

Daily Kos has a humorous post today about Conservatives praise for March of the Penguins as a movie promoting life (while recent news stories suggest that the penguins in many places are being wiped out by global warming.) Oh well. At least the penguins will enjoy monogamy and family values for a few years before they go extinct.
at 6:27 AM No comments:

The say the bass really bite at this time of year. 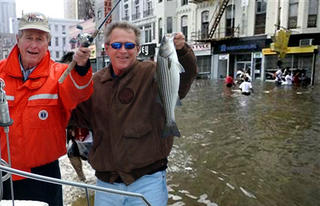 I saw this post, titled Are You Surprised, at the Progressive Society Blog:

January 2001: Bush appoints Joe Allbaugh, a crony from Texas, as head of FEMA. Allbaugh has no previous experience in disaster management.

April 2001: Budget Director Mitch Daniels announces the Bush administration's goal of privatizing much of FEMA's work. In May, Allbaugh confirms that FEMA will be downsized:

"Many are concerned that federal disaster assistance may have evolved into both an oversized entitlement program...." he said. "Expectations of when the federal government should be involved and the degree of involvement may have ballooned beyond what is an appropriate level."

2001: FEMA designates a major hurricane hitting New Orleans as one of the three "likeliest, most catastrophic disasters facing this country."

December 2002: After less than two years at FEMA, Allbaugh announces he is leaving to start up a consulting firm that advises companies seeking to do business in Iraq. He is succeeded by his deputy, Michael Brown, who, like Allbaugh, has no previous experience in disaster management.

March 2003: FEMA is downgraded from a cabinet level position and folded into the Department of Homeland Security. Its mission is refocused on fighting acts of terrorism.

2003: Under its new organization chart within DHS, FEMA's preparation and planning functions are reassigned to a new Office of Preparedness and Response. FEMA will henceforth focus only on response and recovery.

Summer 2004: FEMA denies Louisiana's pre-disaster mitigation funding requests. Says Jefferson Parish flood zone manager Tom Rodrigue: "You would think we would get maximum consideration....This is what the grant program called for. We were more than qualified for it."

June 2004: The Army Corps of Engineers budget for levee construction in New Orleans is slashed. Jefferson Parish emergency management chiefs Walter Maestri comments: "It appears that the money has been moved in the president's budget to handle homeland security and the war in Iraq, and I suppose that's the price we pay."

June 2005: Funding for the New Orleans district of the U.S. Army Corps of Engineers is cut by a record $71.2 million. One of the hardest-hit areas is the Southeast Louisiana Urban Flood Control Project, which was created after the May 1995 flood to improve drainage in Jefferson, Orleans and St. Tammany parishes.

August 2005: While New Orleans is undergoing a slow motion catastrophe, Bush mugs for the cameras, cuts a cake for John McCain, plays the guitar for Mark Wills, delivers an address about V-J day, and continues with his vacation. When he finally gets around to acknowledging the scope of the unfolding disaster, he delivers only a photo op on Air Force One and a flat, defensive, laundry list speech in the Rose Garden. So: A crony with no relevant experience was installed as head of FEMA. Mitigation budgets for New Orleans were slashed even though it was known to be one of the top three risks in the country. FEMA was deliberately downsized as part of the Bush administration's conservative agenda to reduce the role of government. After DHS was created, FEMA's preparation and planning functions were taken away. Actions have consequences. No one could predict that a hurricane the size of Katrina would hit this year, but the slow federal response when it did happen was no accident. It was the result of four years of deliberate Republican policy and budget choices that favor ideology and partisan loyalty at the expense of operational competence. It's the Bush administration in a nutshell.
at 1:32 PM No comments: