Michele Bachmann, the right-wing congresswoman from Minnesota, says that she never called for the news media to investigate members of Congress who might be anti-American.

Colmes: You said you were concerned during the campaign that Obama had anti American views and you said the news media should do a penetrating expose and take a look at the people and find out, are they pro-America or anti-America.

I would say, what I would say is that the news media should do a penetrating expose and take a look -- I wish they would. I wish the American media would take a great look at the views of the people in Congress and find out, are they pro-America or anti-America? I think the people would love to see an expose like that. 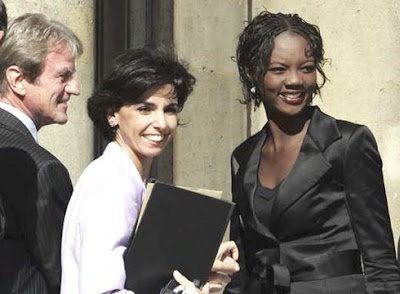 Palin may be pretty but she pales in front of this lady, now France's minister of state.
at 2:33 PM No comments:

Does Franken have a shot at taking Minnesota?
at 7:59 PM No comments:

The latest major conservative to endorse Obama: Francis Fukuyama, author of The End of History, third generation Straussian, student of Allan Bloom and colleague of Harvey Mansfield, William Kristol and Paul Wolfowitz. He writes in the American Conservative:

I'm voting for Barack Obama this November for a very simple reason. It is hard to imagine a more disastrous presidency than that of George W. Bush. It was bad enough that he launched an unnecessary war and undermined the standing of the United States throughout the world in his first term. But in the waning days of his administration, he is presiding over a collapse of the American financial system and broader economy that will have consequences for years to come.

As a general rule, democracies don't work well if voters do not hold political parties accountable for failure. While John McCain is trying desperately to pretend that he never had anything to do with the Republican Party, I think it would a travesty to reward the Republicans for failure on such a grand scale.

McCain's appeal was always that he could think for himself, but as the campaign has progressed, he has seemed simply erratic and hotheaded. His choice of Sarah Palin as a running mate was highly irresponsible; we have suffered under the current president who entered office without much knowledge of the world and was easily captured by the wrong advisers. McCain's lurching from Reaganite free- marketer to populist tribune makes one wonder whether he has any underlying principles at all.

America has been living in a dream world for the past few years, losing its basic values of thrift and prudence and living far beyond its means, even as it has lectured the rest of the world to follow its model. At a time when the U.S. government has just nationalized a good part of the banking sector, we need to rethink a lot of the Reaganite verities of the past generation regarding taxes and regulation. Important as they were back in the 1980s and '90s, they just won't cut it for the period we are now entering. Obama is much better positioned to reinvent the American model and will certainly present a very different and more positive face of America to the rest of the world.
at 5:40 PM No comments:

These People are Roving Mad!

A Republican smear team tried to get an Oxford philosopher to "prove" that Obama's memoirs were written by Ayers? I couldn't make this stuff up if I tried.
at 4:20 AM No comments: